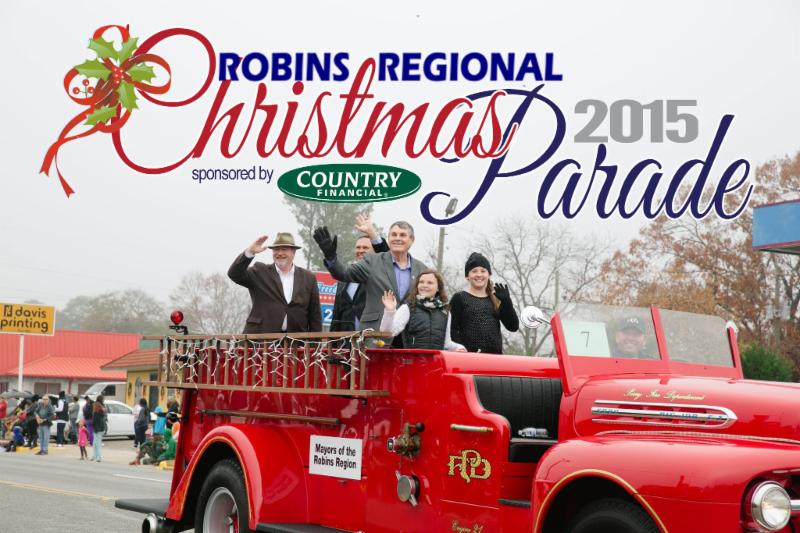 Here comes Santa Claus! The Robins Regional Chamber is pleased to announce that the 58th Annual Robins Regional Christmas Parade will be held on Saturday, December 5, 2015.  This year’s parade is sponsored by Country Financial. Featured as Grand Marshal this year will be Warner Robins Fire Department’s Johnathan Clark, the 2015 the Georgia State Firefighter’s Association Rookie of the Year .

Parade begins at 10:00 a.m. at the intersection of Houston Road and Watson Boulevard heading east.  NEW THIS YEAR: The parade will turn south at Davis Drive and end at the McConnell-Talbot stadium. The route change was made in an effort to utilize the existing infrastructure at the MAC as a secure area for disembarking floats, loading buses and managing large volumes of parade participants.  The change should also bring some additional attention to the retail and service businesses open on Commercial Circle and ease some end-of-parade congestion in the area.

Themed “Christmas at the Movies,” this year’s event is geared toward highlighting Christmas in film for parade attendees to experience an actual “major motion picture event.” Participants have been encouraged to be creative as they decorate and celebrate the season with popular motion pictures through the years.

Vying for best in show for each category, parade entries are judged by a select group of business and community members on theme-related decoration, creativity, originality and of course, music! As tradition would have it, the very last float will feature none other than jolly old Saint Nick!  Sponsoring the Santa float is one of the Robins Region’s newest businesses, Morris Bank.

The Robins Regional Christmas Parade is one of Georgia’s largest Christmas holiday events and provides a great opportunity for area organizations and businesses to gain valuable exposure and show off their community spirit.  Each year thousands of community members attend this much anticipated holiday event where business owners, educational organizations and recreational entities unite in an effort to make the season jolly!

In addition to the thousands of spectators attending in person, television viewers will once again be able to watch familiar faces Frank Malloy and Lorra Lynch Jones moderate the parade and broadcast LIVE on 13WMAZ and 13WMAZ.com. WMAZ as well as other media outlets also rebroadcast the parade throughout the holiday season.

Entries include vehicles, marching units, creative homemade floats, commercial floats, and vehicle clubs.  Registration is officially closed for the 2015 Christmas parade, but please come out and watch this exciting extravaganza as nearly 140 units parade down Watson Boulevard on December 5th!